On the AnxietyUK.org website, they say that 15% of the UK’s population suffer from Anxiety in some form or another and those of us that do suffer are often told to “snap out of it”. I can’t say enough how true this is, there have been so many times when I’ve been anxious about something, worried that someone has died in a terrible accident or is going to leave me and the response I get is “have you been to the doctors?” or “stop worrying, you worry too much”. Oh, if only it was that simple.

I guess I have always had anxiety – thinking back at some of the events in my life it must have always been there. But it is only in the past couple of years it’s had a major impact on my life and I’ve begun to understand how it affects me.

Often, I can feel anxious for no apparent reason, others it’s over minor events or occurrences but sometimes if there’s something negative happening in my life it’s more prominent. It can come on out of nowhere or something that happens or is said can trigger it. I can’t control it and I don’t know when my anxiety can strike – the only thing I do know is that if I could switch it off, I would.

Only the other night I had a restless night’s sleep thanks to Anxiety. I was anxious about walking to work, something I do so often. I was convinced something was going to happen to me and spent half the night planning the different route’s I could take. In the short amount of sleep I got I even had a dream that I received a text saying “Do not walk again”. Low and behold, I got up, walked to work (enjoyed it too) and lived to tell the tale. It was completely irrational but it happens so often. 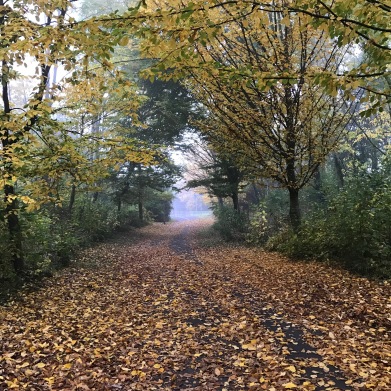 I like to consider myself quite friendly and approachable, I don’t take myself too seriously and smile a lot. But that doesn’t stop me walking in to a room full of people or meeting someone for the first time and being convinced that they don’t like me and turning little things in to world ending disasters. Again, thanks Anxiety. I know it can sound odd, and I know in reality that they don’t all dislike me and the world won’t end if the chicken isn’t defrosted in time for tea, but it doesn’t stop me thinking it at that moment in time.

There’s also physical traits I’ve noticed with my anxiety, little things I do. Such as biting the inside of my mouth or scratching my arm. I get really fidgety, short breaths and butterflies in my stomach. I’ve also recently started getting a hot patch on the bottom of my right leg(?!).  To anyone else, these things aren’t necessarily noticeable. But when I’m worried that the world hates me, I’m rubbish at my job and destined to fail in life – that’s when people begin to notice.

People suffer anxiety in different ways, I’ve never had an anxiety attack that’s left me bed bound, but it has left me at a pretty low point. The thing that I have found which has helped me, and made me become more aware of my anxiety is Mindfulness.

If you were to search “What is mindfulness?”, Google will tell you that it is “a mental state achieved by focusing one’s awareness on the present moment, while calmly acknowledging and accepting one’s feelings, thoughts, and bodily sensations, used as a therapeutic technique” and it is just that. Mindfulness is being aware of the now, you don’t focus on what has happened or what is going to happen in the future, you just use various techniques to become aware of your present state through meditation or movement.

We do hourly mindfulness sessions once a month at work, our coach talks us through mindfulness, how have we been practicing, and the different ways it helps us. He reminds us every month that as humans we are wired to always look for the negative and that we are worriers.

We’ve recently been doing Yoga Nidra, a deep meditation where you are in a state of consciousness between waking and going to sleep (you know that bit where you tend to jump when you feel like you’re falling?). This is my favourite practise, not only does it have us lying down at 10am on a Monday morning, but it’s the one that relaxes me and I benefit the most from. Our coach tells us that half an hour of Yoga Nidra is the equivalent to 4 hours sleep or something like that. There’s been so many times I’ve gone in to the sessions with Anxiety and left feeling completely fine.

What we do in the Yoga Nidra is lie on the floor, head slightly raised off the floor so that the spine and neck are long. Legs lay flat, arms out to the side, palms faced up if this is comfortable enough for you. Our coach gets us to shut our eyes, focus on our breathing (as it is naturally, don’t control breaths) before starting the Yoga Nidra. During this practise that can last between 30-40mins, he goes through all the points in the body, and asks us to make a resolve. Sometimes I’ve got so far into it I’ve been listening to what he’s saying whilst dreaming. It’s incredible and makes me feel so motivated for hours after.

There’s other stuff we do like ‘Thich Nhat Hanh’ which is 10 movements and other breathing exercises (all of which can be found on YouTube). I highly recommend trying these if you suffer from Anxiety. Another trick for anxiety that our coach told us was to breathe deeply, so deep your tummy expands and repeat until you’re feeling calmer.

You will also see on the results page ‘Mindfulness for Mental Wellbeing’ from the NHS and Mindfulness from Mind.org.uk so it must be helping in some way!

To practice Mindfulness at home I use the Calm app or even sometimes Headspace, they’re really good and have many meditations that you can do completely free. But also, as a said before YouTube has many mindfulness videos – if you do get the chance to go to a class though I would definitely suggest it.

Along with Mindfulness, there are other things I do that I feel help with me Anxiety. I walk quite a bit, I live 3 miles away from where I work so some days I’ll walk. It takes me about 50 minutes to walk one way but even just having that little bit of exercise on a weekly basis helps loads.

Also, you know one of my resolutions is to run a mile a day for a year? Well I also noticed the impact that’s having on my anxiety. I know it’s not a massive amount of exercise and I’ve not been doing it for long but it still helps to supress some of my anxiety.

There’s a lot of studies and articles on the internet that discuss the impact regular exercise can have on anxiety, I personally have noticed a huge difference and this, bar mindfulness, is my biggest relief. I’ve joined a gym that opens next month, they have yoga classes so I’m definitely going to give those a go too.

Blogging helps, writing this blog post alone is good as I’ve not really spoken about my anxiety with anyone other than my close family and friends before. And also being surrounding by the greatest people that make me laugh and motivate me every single day helps loads.

People do suffer anxiety and control it in different ways, ways that work for them. This is what works for me, it doesn’t “cure” my Anxiety, but it allows me to control it enough that it doesn’t become too much.

One thought on “Anxiety and I”